Online entry until midday on Friday 6 May. Entries also available on the day at the pre-race HQ.

Start and finish: The start is on Petersham Road, just up from the junction with Star and Garter Hill, approximately 400 meters from the pre-race HQ (Rose of York pub,

Race number and chip for all entrants after 23 April, and for anyone who has not collected them from Sporting Feet, will be available for collection on the morning of the race from the pre-race HQ.

If you are unable to attend the race then please remember to return the timing chip which is already in a pre-paid self-addressed envelope.

How to enter: Online entries until midday on Friday 6 May – see link above at “How to Enter”.

Entries on the day: There will be entries available on the day at the pre-race HQ. Please allow plenty of time to register and pay (card only).

Getting there by public transport: Bus stop “Nightingale Lane” on bus route 65 is within a 2 minute walk of the pre-race HQ. Please see the Transport for London website for routes and information.

Parking: Please note that there is no parking at the pre-race HQ, Ranelagh Harriers’ clubhouse or the post-race HQ.

There is parking though in residential streets near the pre-race HQ. There is also plenty of free parking near the finish around Ham Common and the surrounding roads only a short walk from the finish and post-race HQ. Please be considerate of local residents when parking.

Please leave enough time to parking, leave your bag at the bag drop / collect your race number and chip from the pre-race HQ, and the short walk to the race start.

Official race photos: There will be photographers on the course and at the finish line, so don’t forget to give them a smile! Sign up at MyBibNumber in advance of the race to be notified when your photos are ready and receive a £5 discount.

The club’s annual half-marathon race is a fast and flat course which runs through Richmond and Twickenham, down to Hampton Court Bridge and back up along the Thames towpath to Ham. The race forms part of the club’s Summer Road Grand Prix and represents the club’s half marathon Road championships. It is also the Surrey Half-Marathon Championships and forms part of the Surrey Road League. 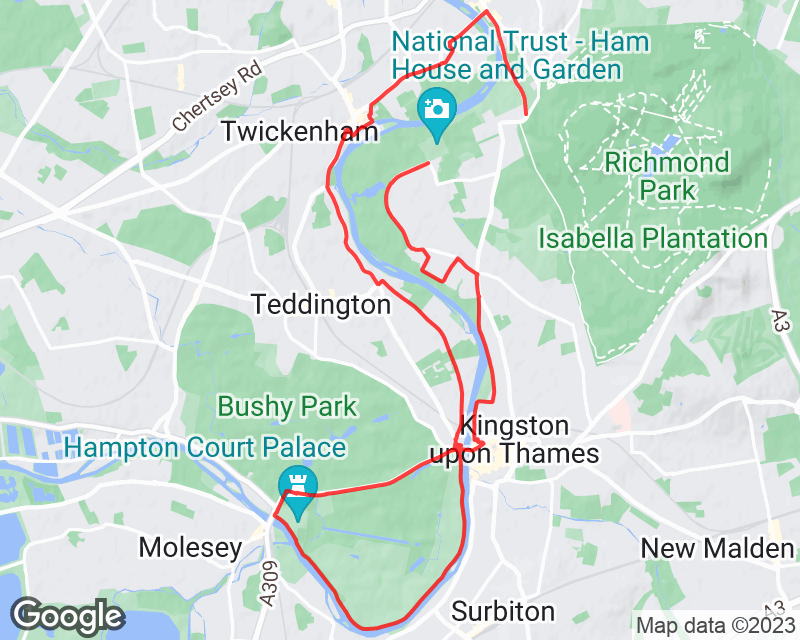 It’s a fast, flat and scenic route that is ideal for a PB. The race starts on Petersham Road, just up from the junction with Star and Garter Hill, and head initially to Richmond Bridge. Runners cross the bridge joining Richmond Road which they follow into Twickenham before joining the river opposite the famous Eel Pie Island. By Diamond Jubilee Gardens the route leaves the river and follows Cross Deep past Radnor Gardens and then proceeds along Twickenham Road all the way to the left hand turn down Ferry Road near Teddington Lock. The course then heads right along Broom Road which then becomes Lower Teddington Road. The route passes under Kingston Bridge after which it follows Hampton Court Road all the way to the Hampton Court Bridge. At the bridge runners turn left onto Barge Walk and then follow the towpath, with views to the left of majestic Hampton Court Palace and the golf club too, back to Kingston Bridge. The course passes under Kingston Bridge a second time and then over it before heading around the back of John Lewis where it rejoins the towpath once more. From there the route passes through Canbury Gardens and it then follows Low Ham Road passing in front of the main entrance to the Hawker Centre, the site of the former aircraft factory. Runners head left along Dukes Avenue and then left again onto Dysart Avenue before a right turn onto Burnell Avenue. There is then another right turn onto Beaufort Road, a left onto Hardwicke Road before rejoining Dukes Avenue on the left. This leads into Riverside Drive, alongside Ham Lands, with a right hand bend which leads to the finish on grass near the post race HQ, Richmond and Kew FC.

Please always be aware of other road users, runners, cyclists, and spectators.

Roads will not be closed to traffic. While running you must keep to the left-hand side of the road, run on the pavement where possible, and observe the Highway Code.

Unfortunately, the course is not suitable for wheelchairs or pushchairs. Blind or partially sighted runners may be accompanied; other runners must not be accompanied or followed by others on bicycles. Dogs and headphones are not permitted in the race.

For results for earlier events visit the Sport Systems website and search for ‘Ranelagh Richmond Half Marathon’.

All finishers will receive a race goody bag on completing the race.

In addition the following prizes are available and will be presented near the finish line of the race at approximately 10:30am.

Should an individual be eligible for an Open and a Masters prize, the greater value prize will be awarded. The other prize will be offered to the next finisher in either the Open or Masters race. Team prizes are unaffected.

Ranelagh Harriers can also compete for the following trophies