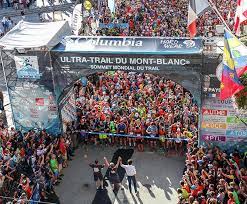 This week saw the alphabet soup that is UTMB (https://utmbmontblanc.com/en/UTMB) incorporating the UTMB, CCC, TDS, OCC, PTL, MCC, YCC and, of course, the Mini UTMB. For those of you who aren’t familiar with it, UTMB is a short jog (170km) around Chamonix with a mere 10km of vertical. This year saw François D’Haene claim his fourth victory making him the most successful runner in UTMB history. In the women’s race, Courtney Dauwalter won her second UTMB in a course record of 22 hrs 30 minutes. Huge congratulations to Ranelagh’s own Tomas Lahille for finishing in 35 hrs 42 minutes!

🔶 On the subject of ultras, HUGE Kudos to Chris Cato for running four legs of the El Camino Santiago covering 100 kilometres in two days. For those wondering, the El Camino Santiago is a network of pilgrims’ ways or pilgrimages leading to the shrine of the apostle Saint James the Great in the cathedral of Santiago de Compostela in Galicia in north-western Spain (https://en.wikipedia.org/wiki/Camino_de_Santiago).

🔷 While most of us aren’t running hundreds of miles in the mountains, many of us are gearing up for autumn marathons and ultras, with long runs from Michelle Beaumont, Rebecca Bissell, Phil Collins, Owen Delaney, Paul Doyle, Ashleigh Ferris, Clare Fowler, Kate Gadd (congratulations on your first half marathon), James Graham, Karima Graham, Charlie Harrison, Mark Herbert, Gavin Hillhouse, Nick Impey (who couple his long run with winning the Runthrough Dorney Half in 1:12:07!), Dick Johnson (his longest since November 2019), Ann Kearey, Wiebke Kortum, Simon Martin, Sally Minchella, David Ready, Ed Smith, Jonathan Smith, Sergio Stillacci, Alun Thomas, Bob Tinsley, Nick Twomey, Claire Warner, Al Whatmough and Gareth Williams. Controversially, Jon and Sue Lear, Bruce McLaren, Bill Neely and Paul Roberts did their long runs during the week. Poor Bill did so much running up and down to the beach he didn’t even get a swim!

🔶 Runs that captured Rundown’s imagination this week included: Andrew Kew and Alun Thomas running to a jazz concert in a front garden, Kelly Thomas and Narissa Vox who ‘walked the sh*t’ out of their run, Jackson Creegan ran ‘more hills than Kate Bush’, James Graham did further ‘Zimmering’ (refuelling at Steins also lead him to wonder how he fit sauerkraut, sausage and beer in his race vest for UTS50) and Jon Lear’s ‘WU, Tempo, Chased by Horses, CD’.

🔷 Many of you seem to be on holiday in beautiful places but still getting your runs in based on the photos from Kris Davidson, Clare Day, Clare Fowler, Bill Neely and Suzy Whatmough. Suzy even got two Cups on her visit to the Coppershell Farm animal sanctuary.

🔶 Pun of the week also goes to Bruce for ‘show me the Wey’ complete with Pete Frampton photo. For those younger than 50 try (https://open.spotify.com/track/6BD1X1PeV5UzYUdiVaD2yL), although I’ve always preferred the Dinosaur Jr version (https://www.youtube.com/watch?v=as6pXqWYE4U).

🔷 Racing this week we saw Mark Herbert and Vaughan Ramsey in the Arethusa Mile, Cordy Parker running a 10:19 3k in her ‘one and only track race of the year’, Carol Aikin and Paul Doyle running the Last Friday 5k in Hyde Park, and Shaun Griffith in the Spitfire 10k. In the multisports category, Pat Wright won the Conquer the Chilterns Duathlon and Camilla Mignot took part in the Dorney Lake Sprint Triathlon.

🔶 Finally, happy second birthday to Fika Mockett-Van Keulen. Congratulations for dragging Ted around Frimley Lodge parkrun in 16:48 (shame the squirrel chasing meant you were pipped for first finisher). On a parkrun theme, congratulations to Hadi Khatamizadeh and Gareth Williams for their parkrun PBs of 20:15 and 16:55 respectively – Hadi’s by a massive 56 seconds.