This Rundown’s brought to you by strong coffee and 1 hour 40 minutes sleep, so forgive me if it gets a little confused. The Rundown equivalent of a Liam Joyce run perhaps? In this week’s escapade, Sam Slater had to prevent their run around Richmond Park and Wimbledon Common becoming an impromptu trip to Sutton.

🔹This week I have mostly been watching two things: Paul Murphy’s dog jogs, and James Ritchie and Suzy Whatmough’s trip to the Lakes.
🔸 On the dog jog front, we started on Monday with a soggy dog jog, moving to a hyper dog jog, a too hot dog jog, finally becoming a nervous dog jog with a side order of dog jog back from garage.
🔹 The trip to the Lakes was of a more personal interest with a ‘race’ pace recce of Leg 1 of the Bob Graham Round in the dark, investigating the best way off Blencathra and from Scafell Pike to Scafell, and a bonus part recce of Leg 3 (following the cancellation of the Ennerdale Horseshoe due to high winds). Thanks for your dedication. I hope this correspondent can live up to it.
🔸 On the subject of ultrarunning, huge congratulations to my hero, Sally Minchella, for completing her first 100 miler, the South Downs Way 100, with a not inconsiderable 3,500m of ascent. In her own words it was ‘brutal. Rollercoaster of emotions. Wheels royally fell off at around 150k when I couldn’t face food and ran out of all energy 😬.’ Sally was expertly paced by Susan Ritchie for 20 miles and less expertly paced by your writer for the final 30, with transport generously provided by Kathy Henry.
🔹 In other races, Tuesday saw Marcus Atkins, Rebecca Bissell, Cecily Day, Jeremy Day, Nic Douglas, Clare Fowler, Samuel Harry, Mark Herbert, Rick Jenner, Hadi Khatamizadeh, Aoife Kilpatrick, Dave Lawley, Marc Leyshon, Sarah Palmer, Neil Rae, Ed Smith and Mike Thomas take on the Parkland Relays. We’re still awaiting the results by carrier pigeon but suffice to say there were some very quick times!
🔸 Sunday saw the Turk’s Head 10k Fun Run. Despite the fun run title, there some excellent runs with Adrienne Baddeley and Nic Douglas taking 🥇 and 🥈 in the women’s race and Henry Fagan taking 🥉 in the men’s, with a PB of around 35 minutes. Congratulations also to Stephen Aikin, Alberto Esguevillas, Daragh Fagan, Russell Holt, Hadi Khatamizadeh, Aoife Kilpatrick, Wiebke Kortum, Michael Morris, Ciaran O’Donnell, Phil Roberts, Amrut Sharma, Felix von Schubert, Louise Wapshott, Narissa Vox and Pete Vox (PB of 1:16:53). Slightly further afield, in Dorking, we saw Shaun Griffith, Jarryd Hillhouse (PB 1:05) and Stephen Logue run the Dorking 10.
🔹 Over in Wales, we saw Ross MacDonald and Jonny Smith take on a horse, in the none more Ronseal, Man vs Horse. Ross took home 4th (human) place while Jonny took home a nice foil blanket donated to him by the medical team (I can’t find his position)! Ed Perry ran the Offa’s Dyke 15, coming 11th in 2:04 a full 5 minutes faster than his 2019 attempt. Jon and Sue Lear tackled the Jersey Half marathon and Eirin McDaid completed the Cardinham Woods (almost) 10k.
🔸 Saturday was Crane parkrun’s 10th anniversary, celebrated by Tamsin Burland, Sue Camp, Sally Ewen, Martin Harris, Kathy Henry, Ann Kearey, Kevin Kearey, Marianne Malam, Heather Martingell, Joanna Moore, Bronwen Northmore, Rebecca Northmore, Alex Ring, James Russell, Siobhan Sharp, Alun Thomas, Melanie Thomas, Rue Turner, Paul Wapshott, Claire Warner and Gareth Williams (leading Ranelagh home in 18:12).
🔹 On the subject of anniversaries, happy 50th birthday to Alex ‘Captain Injustice’ Ring and congratulations to Simon Martin and Victoria Hart on their wedding. Simon celebrated with Old Deer Park parkrun, Ed Forbes captured the mood as ‘ODP parkrun beautiful chaos’ with ‘diversions, obstacles, at least 2 grooms, brides, hens, rugby players wandering all over the place.’ 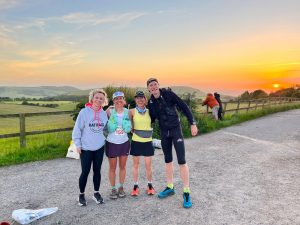 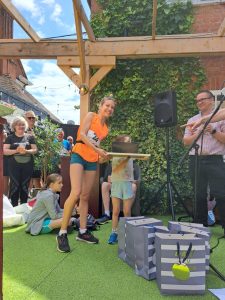 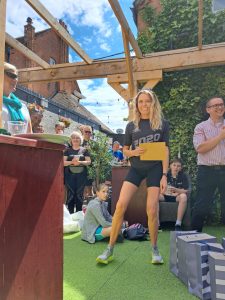 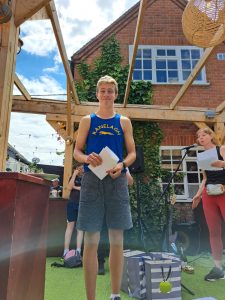