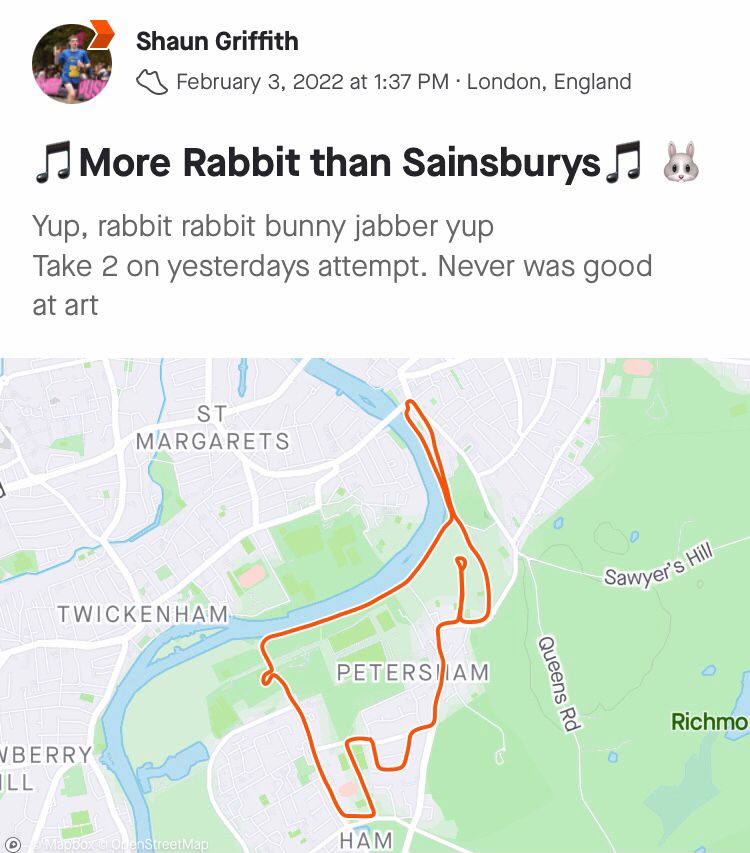 Marathon season is in the air this week, with many of you making your long runs longer (or megaruns mega if you’re Ryan Fisher). An impressive 26 of you ran long runs of 25km+ this week. We hope your training is going to plan and we look forward to seeing you reap the rewards of this hard work in the coming months!

In total this week, you awesome people ran 6,553km over 739 activities. Nicely done.

Highlights from this week:

🔷 The clubhouse reopened on Tuesday with many of us excited to go back and see familiar faces from across the various groups. Advanced 1 and 2 enjoyed a combined session “exploring the dark corners of old deer park” (according to Liam Joyce) with “a mighty fine group” (thanks James Whistler!). Meanwhile Inter 3’s had to adapt their session due to fears of being caught in the crossfire of the deer cull – we’re glad to report that Ranelagh training has paid off and they were able to run to safety.

🔶 On the theme of hoofed mammals, we’re pleased that David Ready was successful in “trying to claw the fitness back post stag”. He ended the week with a strong run noting that “Paris is back on track”! And on the theme of hard work paying off, we congratulate Ann Kearey who “Got it done (Just about)” and Sam Rhodes for “trying to be disciplined”. It might help to know that we’re watching you Sam 👀 (no pressure).

🔶 Ross MacDonald went exploring and found Butthole Lane; James Riley found the “slippery slope to the weekend”; and Ed Forbes, James Whistler and Dave Lawley went in search for the Wizard of Oz in today’s long run, complete with a “yellow brick road, rainbow, Toto running alongside us and what felt like a tornado in our faces. Legs felt like Tinman too.” We hope you found your way home!

🔷 The wind was a common theme today. Smart long running from Alex Ring, who ran east to maintain the tailwind. Meanwhile Liam Joyce and Sam Slater took on the wind in their run from the city “back to the burbs”. Kathy was relieved that the weather “sounded worse from my kitchen than it was in reality”. Jon Lear took “a run on the wild side”. And Nic Douglas couldn’t escape “That headwind 😫”.

🔶 Meanwhile some of you decided to slow down your long runs with a bit of mud. Marcus Atkins “found it in abundance” at Mole Valley. Though it looks like Bruce McLaren, Gareth Williams, James Ritchie, Simon Martin and Mark Herbert found it in even greater abundance further west in their Surrey Hills run.

🔷 We’ve had some Strava art masterpieces from you this week, all with spring themes. They’re all so creative, thought-provoking and beautifully drawn, it’s hard to pick the best – so we’ll let you decide. The three contenders are: Shaun Griffith’s Rabbit (at duracel bunny speed), Sue Lear’s Carrot (return of the carrot), and last but not least was Narissa’s Easter Egg (with credits also to Pete Vox and Kelly Thomas for the team effort involved at the planning stage). Photos below. 🐇, 🥕 or 🥚?

🔷 Well done also to Keeley Phillips who ran the Cardinham 5k Canicross minus dog. Not sure if that is a competitive advantage or not… I suppose it depends on the 🐕. We hope he’s better soon!

🔶 108 of us took part in In parkrun this weekend, including a lovely group celebrating Claire Warner’s 200th at Crane Park (complete with homemade cakes and sausage rolls). There were also some strong performances, including:

🔷 We’re glad to see that injuries are subsiding for Bruce McLaren, Sarah Palmer, and Ed Perry – hope to see you all back up to speed soon 💛💙

Well done everyone, and hope you all enjoy some well earned relaxation for the rest of the weekend! 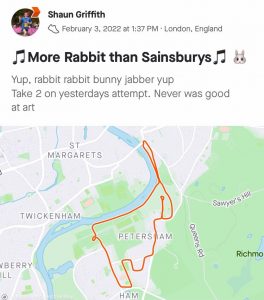 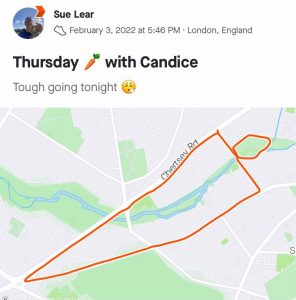 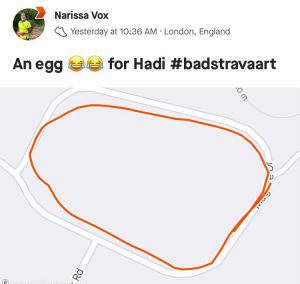