“First done way back in 1932 by Bob Graham, hotelier of Keswick, Cumberland, at the age of 42, the 42 Peak Bob Graham Round has become a testing ground for the supremely fit. Each summer around 100 of the most highly tuned ultra-distance fell runners will attempt the 27,000 ft of ascent within the allotted 24 hours. Only one in three will return to the Keswick Moot Hall before the clock runs down. Most of the rest will be back again…!” – bobgrahamclub.org

And now, 90 years on from the first round by Bob, Ranelagh has it’s first member of the Bob Graham Club!

🔷 Of course we must start with the news from the Lake District, where the “supremely fit” and “most highly tuned” James Riley completed the Bob Graham Round in 21:14. Yes that’s 21 hours and 14 minutes for 42 lakeland fells, 66.85 miles and 27,657 ft of elevation. Just a stunning achievement. Congratulations. In the words of the the man himself: “Bit overwhelmed and don’t know what to say.”

To put this all in a further bit on context, should you need it… So far in 2022 164 people have registered intention to attempt the round, so far, only 29 have been successful. And since the formation of the Bob Graham Club in 1971 (which every successful finisher is invited to join) only 2610 people have completed it. None of those, until now, have worn the blue and gold of Ranelagh.

Really there’s no need to say more than that, the numbers and scale of achievement speak for themselves, but of course we should add significant shout outs to the support team who got James round, including of course Sally Minchella crewing the whole thing, which as we all know is only mildly less tiring than actually running it, and the support runners: Suzy Whatmough, Mark Herbert, Jonathan Smith, James Ritchie and Rick Jenner, keeping spirits up, navigating, pacing and putting in months preparation and reccing that an attempt like this takes. Bravo to you all and an absolutely stunning way to achieve another first for the club!

🔶 Closer to home but equally as committed in their own way were the 74 Ranelagh runners who turned out for the (mini) Mob Match against The Stragglers AC. This ‘mini’ format – featuring 5km of a local parkrun course – had been realised way back in 2008. Since then, scores have been close and at 2019, it was 6:5 in the Stragglers’ favour. After a 2 year hiatus due to Covid, could Ranelagh even the score?

The scene was Old Deer Park parkrun, featuring 3 grassy laps around the field. Temperatures were already high by the morning and the ground was rock hard – whatever the outcome, it would be a fast, furious and hot 5km race. As everyone gathered, the number of Ranelagh blue & gold vests seem to slightly outnumber the yellow of Stragglers. This were confirmed in the results, with only mere 51 Stragglers turning up against a sea of 75 Ranelagh. But would this alone be enough to guarantee a favourable outcome for us?

The atmosphere was good-natured, although other participants at ODP were overheard to be wondering what in heaven’s name was happening that day. The race started prompt at 9am and the front runners leapt ahead – no one was taking any prisoners here. The 3 laps round meant that anything could happen and although we had the edge in numbers; as the first finishers crossed the line, it looked like it might be a tightly contested affair.

It was clear this was a mob match that would be decided in the next 20 – 30 finishers. Would it be a sea of Ranelagh or a flood of Stragglers next? A resounding blue wave crashed down and put paid to that question. Of the next 27 finishers, 17 were wearing blue & gold, and by the time the first 40 finishers crossed the line, 22 were Ranelagh against only 8 Stragglers.

After a fab day of club running, in glorious marshalling weather, the two clubs decamped for some well-deserved coffee and cake, provided by our social secretary Hadi Khatamizadeh. A huge thank you must go to Old Deer Park parkrun’s friendly volunteers for their fabulous organisation and marshalling. Commiserations to Stragglers and congratulations to all Ranelagh’s taking part – we look forward to next year’s rematch.

🔷 Further south, Rebecca Bissell ran the fabulously named Tsunami coastal marathon in Cornwall and came 3rd lady, in 6:21:11. Here at Rundown towers we did our research and discovered that the coast of Cornwall was hit by a 3m high Tsunami on the 1 November 1755, following the Lisbon Earthquake. This Tsunami was also observed along the south coast of England and on the River Thames – so who knows maybe there is a link to Richmond?! By the looks of it though a 3m Tsunami wouldn’t have troubled Rebecca or any of the other runners as they scampered up the coast path to safety. The 11th century one as mentioned in the Anglo Saxon Chronicles however… I digress. Looked a stunning event. Amazing work Rebecca!

🔶 It’s been a bit hot in the UK this week in case you hadn’t noticed! An by the looks of things you had, and generally decided to carry on anyway. Of particular note was Paul Murphy who decided (and regretted) doing a 20 mile trail run to the Surrey 3 peaks on the hottest day of the year, Bruce McLaren, also deciding Box hill was the plan not be on a hot day – and observing “Cool in the shade, Less so when not” and Narissa Vox, who, like many of us seems to enjoy a regular conversation with her Garmin “pace high, pace in range, pace high pace in range” 🤬 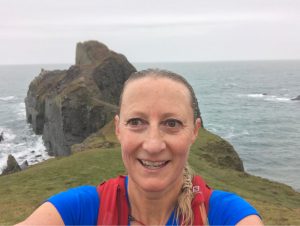 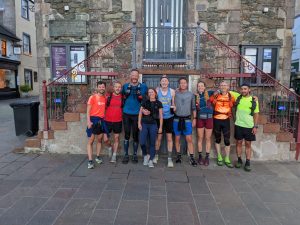 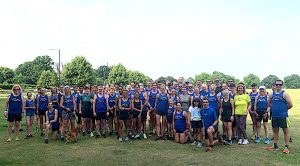