This week saw winter arrive 🥶 and you lot rack up 5,741km of running. Nice work all!

🔷 Congrats also to Shaun Griffiths who ran 1:31:40 at the Herts Half, and Mike Morris who came 7th in the Serpentine 7k handicap. Earlier in the week Henry Fagan raced the hilly Haskell XC Relays, covering just over 3km in a superb time of 11:42. Well done all!

🔶 In other racing, we were impressed by runs from Andy Starr, Owen Delaney and Louise Wapshott who, based on their activity descriptions, had to dig deep for their races this weekend. Andy ran the Reading Half Marathon somewhat underprepared, but in honour of his mum who wanted to cheer him at mile 5. Owen ran the Thames Meander Marathon (“sweet Jesus” was his summary), and Louise ran the hilly G3 15km saying she’ll never ever do that again. Though hopefully she’s feeling differently about it now!

🔷 Type 2 fun was also a theme for James Riley, James Ritchie, Clare Fowler, Jonny Smith and Suzy Whatmough who were in the Lake District this weekend, recceing parts of the Bob Graham Round. This type of fun is the kind that’s not especially fun at the time (e.g. when feeling like you might get blown off a mountain or become hypothermic) but becomes more enjoyable when wrapped up in blankets in the bar later. Strong winds, rain and cold caused us to adapt our planned routes, including a pit stop by the fire in The Wasdale Arms (featuring some comical eating and drinking with very shaky hands). But we managed to get some useful recceing done despite the elements, and even got a few views!

🔶 This weekend we had some mega parkrun milestone celebrations from three dedicated Ranelaghs. James Russell, who ran the inaugural parkrun in Bushy Park, has now reached number 600. He celebrated with his boys and other Ranelaghs in Crane Park. Meanwhile Carol Aikin ran her home parkrun in Richmond Park to celebrate her 400th, along with Jeremy Day who reached his 300th. Well done all!

🔷 Wednesday must have been a full moon because we had two accidents – Ted Mockett took a nasty fall (hope you’re ok and back up and running soon Ted) and Kathy Henry who was thankfully ok (or at least better off than her fave leggings). Take care both 💛

❤️ Finally, a big congratulations to Ross Clayton and Camilla Mignot who got married today! We wish you a lifetime of happy running together! 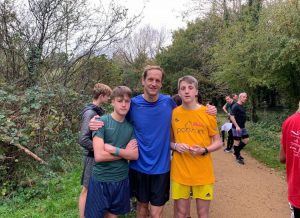 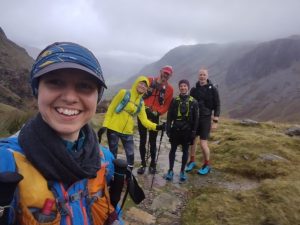 Suzy, Clare, James, Jonny and James in the Lakes